City Of Edmonton Facts and Figures

Throughout the eighteenth Century, in search of new fur supplies, competing companies, the Hudsons Bay Company (HBC) and the North West Company (NWC), established a series of trading posts westward along the

North Saskatchewan River. In 1795, the NWC established a post called Fort Augustus. The HBC at once kept abreast by establishing a nearby post called Edmonton House after an estate near London, England. owned by the company's Deputy Governor.

In 1821 the two companies merged and the HBC post was retained, as was the name Fort Edmonton.

After 1870, as the region became part of the new Dominion of Canada, the settlement’s character started to change. In 1871, legislation at last made it possible for private individuals to own land that at one time belonged solely to the HBC. Edmonton shortly emerged as a new entity away from the protected boundaries of the fort.

Its first important building, a Methodist church, was constructed in 1871 about one mile from Fort Edmonton.

When the northern terminus of the Calgary and Edmonton railway line was constructed on the south side of the river in 1891, Edmonton decided to incorporate as a township. Incorporation was formalized in 1892.

Edmonton was incorporated as a city in 1904. The city became the provisional capital of the new province of

During World War II, Edmonton became the base of operations for the construction of the Alaska Highway as well as other large projects. Prosperity was ensured with the discovery of oil near Leduc in 1947. It now constitutes the staging point for the large-scale oil sands projects going on in northern Alberta and also the significant diamond mining operations in the Northwest Territories.

Several landmark buildings rose on the city skyline in the 1980s and 1990s. West Edmonton Mall, one of the world's largest entertainment and shopping complexes under one roof, was built in phases through the 1980s

The city population topped 750,000 in 2008, and the Edmonton region population exceeded one million that same year. It is the 2nd biggest urban center in Alberta after Calgary, and is Canada's sixth largest census metropolitan area. (It is the most northerly North American city with a metropolitan population over one million.)

The City of Edmonton blankets a region larger than Chicago, Philadelphia, Toronto or Montreal. Edmonton has one of the lowest population concentrations in North America, about 9.4% that of New York City.

It acts as host to a year round slate of world-class festivals, earning Edmonton the title of "The Festival City". A few of the more promenent ones are:

For two weeks in July. 'The Capital City Exhibition' (or Capital Ex). Activities include chuckwagon races, carnival rides and fairways, music, trade shows and daily fireworks. Since 1960, the Sourdough Raft Races have also been a popular event.

The Heritage Days Festival is an ethnocultural food festival that takes place in Hawrelak Park on the Heritage Day long weekend (which includes the first Monday in August).

Mid-summer also is the time of the Taste of Edmonton Food Festival, showcasing local restaurants. 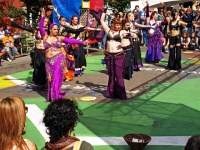 The Edmonton International Fringe Festival, which takes place in mid-August in Old Strathcona, is the largest Fringe Theatre Festival in North America, and second only to the Edinburgh Fringe festival in the world.

In August, Edmonton is also host to the Edmonton Folk Music Festival, one of the most successful and popular folk music festivals in North America.

The Edmonton Symphony Orchestra's annual outdoor Symphony Under the Sky Festival is a popular destination for Edmontonians on Labour Day weekend.

Pure Speculation is a festival of fandom that happens on the third week of October. Founded in 2005, it features a weekend celebrating science fiction, fantasy, gaming, comic books and much, much more.

The Edmonton International Film Festival, which runs from late September to early October, is now in its 19th year and is one of Canada's primary film festivals.

A resident of Edmonton is called an Edmontonian.

Follows is a list of local and regional hospitals: