Published in the Edmonton Sun - April 2011

Sending flowers to cheer someone up when they are depressed, ill or lonely has long been a traditional form of

expressing care and concern. Senior citizens perhaps fall into the category of depressed individuals more than any other group of people. Elderly individuals often develop a form of depression connected with memory loss, lack of socialization, illness and other common factors of growing older. Friends and family members of senior citizens often will send flowers to their loved one in an effort to ease their anxiety and unhappiness. Or sometimes just to brighten their day. It wasn’t until recently that researchers at discovered exactly how much of an effect sending flowers can actually have on senior citizens.

Approximately 100 seniors were selected to participate in the flower study. In an effort to eliminate inadequate results, the participants were not told of the initial reason for the research. The seniors selected for the study were only informed that a research experiment was being conducted for which they had been selected to participate.  The recipients of the flowers were simply told that the bouquets served as a thank you for participating in the study. A series of interviews were conducted throughout the study in order to evaluate the overall health, mood and satisfaction level of the participants.

The initial interview was used to gather baseline information about each individual. Subsequent interviews measured the changes in mood and behavior of the seniors. Once the series of interviews was completed, the participants were asked questions regarding their memory of the flowers they received, their daily social lives and current events. The participants of the study were divided into 4 groups:

1)      The Early Group – This group received flowers after an initial baseline interview. This bouquet was the only one the participants of the group received during the duration of the study.

2)      The Late Group – The participants in this group only received a bouquet of flowers before the last interview.

3)      The All Flowers Group – The seniors in this group received a bouquet of flowers twice during the study.

4)      The No Flowers Group- This group only received flowers after the completion of the study. No flowers were received during the course of the interviews.

Researchers carefully evaluated the changes in behavior and mood of the participants in conjunction with how often and at what point the participants received flowers during the course of the study. The results concluded that receiving flowers no only decreases depression in seniors, but also has the ability to improve the memory and encourage social interaction!

Seniors who participated in the study showed a marked display of increased satisfaction and happiness when flowers were received. In addition, a substantial percentage of participants exhibited a significant improvement in personal memory and social interaction after they receive flowers. Many of them began to include a larger number of social contacts in their daily lives and demonstrated an overall satisfaction and happiness.

This research conducted by indicates that flowers may play a more significant role in the life of seniors than was first suspected. People who are happier tend to live longer and healthier lives.  I can personally attest to this as I would always bring my Grandma and Grandpa flowers on my weekly visit! I still remember the smile it brought and it is one of my fondest memories! Try it! You won’t regret it! 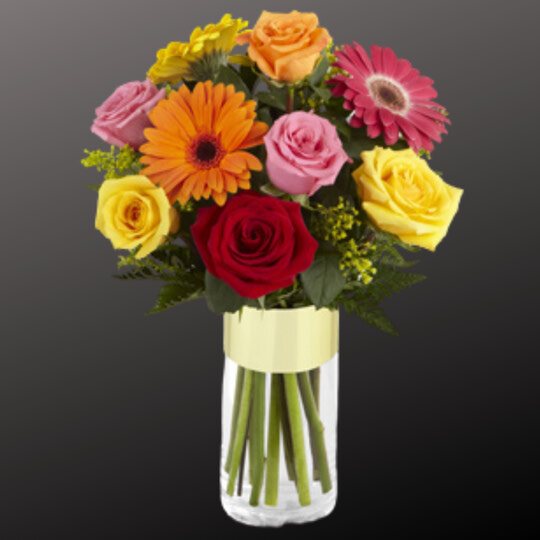 This vased arrangement of mix colored roses and vibrant gerbera daisies is great for birthdays, get wells or any occasion.